Really listening to the users, the not-so-complicated secret to developing better public

Really listening to the users, the not-so-complicated secret to developing better public

With a background in art and sculpture, a full time job in urban development, and a beating heart for her local community, placemaking comes naturally to Matti L. Arentz. At Tøyen Torg, it started with Tøyen kontoret, an open space for the arts, which evolved into Tøyen Hageklubb, a summer project for local children and teenagers. Hageklubben built gardens in pallets and furniture to sit on, there was a workshop almost every day for a full summer.

- We looked at how the square was used, by whom, and how it changed throughout the day and night, she explains. – It’s not just about making it nice while we wait for the permanent upgrade, she emphasises.– It’s about understanding a place and creating a place that teaches us something that we can learn from, and that we can create even better places. 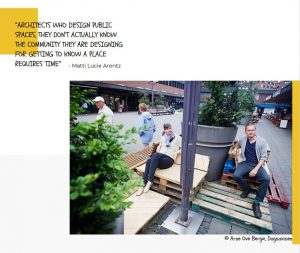 Being present and in dialogue with all sorts of neighbours every afternoon and evening for that whole first summer, led to some key insights. In the evenings, people would come out and sit down on the ground outside the library, to use the free Wifi to Skype with their families in faraway countries. The placemakers soon found out that no matter what their background is, people would ask for the same things; more greenery and more colours, not using snobby materials, allowing user groups to mix and improving the lighting. Matti approached the city, asking for funding to convert these insights into a temporary testbed that could feed local knowhow into the future upgrade of the square.

One of the first upgrades was to construct a landscape with varied seating outside of the library, responding directly to the practical needs of the users of the square. Other community-lead upgrades included changing the tiling of the floor of the square into a carpet-like design, where elements from traditional designs of all local ethnicities were collected through public workshops.The temporary upgrades were so well received by the neighbours that they stayed in place for nearly three years, much longer than the planned two-and-a-half months. And more importantly, it lead the city to reconsider their original, architect-drawn-but-without-community-input plans for the square, becoming thereby also a testbed for how the city can better work with local stakeholders.

For a long time, Tøyen Torg was the favourite place of bureaucrats to concentrate services for vulnerable groups, such as a methadone distribution service to drug addicts and the local immigration police. As a consequence, the local square by the metro station was facing a decline in businesses and it was in need of a revitalisation beyond a physical upgrade. When the city council declared Tøyen to be an “area boost” focus area for the city, in exchange for moving the Munch art museum located in the nearby Tøyen Park to the new harbourfront, the area was ripe for community-led innovation feeding local knowhow into the future upgrade of the square.

Aligning her bottom-up placemaking initiatives to public sector processes and private sector priorities has been a key to success for Matti and her colleagues. This means fully understanding the steps involved in a city-led upgrade to a public square, understanding the needs of local businesses – and always prioritising the community voices.

The project creators took great care to talk to as many different groups as possible, including vulnerable groups such as drug users and senior citizens. Engaging diverse stakeholders through informal workshops and shared tasks to build pilots with the aim to learn for future, more permanent, placemaking projects. Using creative arts, crafts and music to engage local children and youth, including workshops of welding bikes, lyrics workshops with local rappers, and hosting a beach party right in the middle of the square. Tøyen Torg is by many in Oslo listed as the crown example of gentrification in Oslo. And although critics may be right, in that the range of trendy bars currently lining the square may not feel too relevant for most of the multi-ethnic, mainly muslim, neighbours, locals from all walks of life still feel ownership and pride in the way the square has evolved over the last few years. Maybe because their opinions and ideas have been heard, acknowledged and incorporated along the way or simply because the square now feels safer and more welcoming than ever.

The main objective was to keep the project down-to-earth and feel relevant and personal to the neighbours and users of the square and make their opinions count. Therefore, initiating conversations with all users of the square, being a good listener and a keen observer was at the core of their process.

Financing: As the project has gone through several phases, so has the financing, going from hosting unpaid workshops to having funding for participatory activities and testbed construction.The final upgrades to the square were funded in collaboration between the municipality and the building owners surrounding the square.

Did you like the story? Check out more placemaking hero highlights in our booklet "Exploring placemaking in context".