Mads Pålsrud is a creative designer and urban activist who constantlytests new ideas and methods for more sustainable, livable andinclusive cities. Mads has a leading role with the participatory processes regarding converting Kolstadgata from a busy street to acar-free public space. The Kolstadgata project started as a community initiative and gained traction once local politicians got involved. As a result of this mobilizing, the Agency of UrbanEnvironment in the City of Oslo started a pre-project to investigatethe possibilities of making the street car-free and then merging itwith the school yard while also connecting the social and
physicalinfrastructures on either side of the road.Kolstadgata - closing down a streetto create a new public space. These participatory processes were co-developed and executed by Growlab. Being trained as a designer, Mads looks at the interventions he is involved within terms of both physical items and installations, visual communication as well as social connections in collaboration with Maker’s Hub. The main objectives for the project was to look atthe needs and wishes of the neighbors, to activate the area temporarily, toharvest insights and learnings from the whole process and continuously communicate these to the City of Osloand to the architect working with the proposal for the regulatory plan. 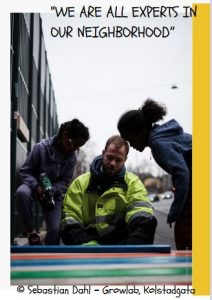 Including and involving citizens is one of Growlab Oslo’s core valuesand strategies in their urban development projects. “Placemaking should be used to work against gentrification - getting the voices of people actually living here heard”, Mads emphasises. Growlab’s work is often combined with prototyping. This prototyping thinking can beused for anything from a bench to a public square. “It’s important toget to the prototyping fast, where you test out things based on people’s ideas. It doesn’t have to be complicated, it can be just a fewlines on a paper”, he says. The closing of the road has been made effective as of September 2019. School kids will now have a biggerarea to play on, and the neighbours are getting a new non-commercial neighbourhood square that unifies the neighbourhoodrather than splitting it in two.

The Kolstadgata project showcases how to create newpublic spaces when cars and traffic are removed from the inner cities. A street in a car-centric city used to be considered to be an artery for the supposedly life giving flows of cars. However, in a newparadigm of people-centric cities, such streets are more and more often seen as barriers for human life, interactions and sustainability. The commons ofa city, where the streets arepart of, can effectively be given back to the community when cars and traffic are removed. The spaces formerly occupied by cars can then become social urban infrastructures such as playgrounds or parks. 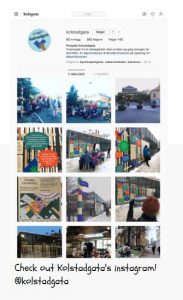 The insight process was tailored with a wide range of activities – pop-up office, interactive questionnaires, interviews, workshops, observation activities, an instagram account and more. Growlab wished to send a clear message to the neighbours, to give many possibilities of getting involved, and to create a fun and engaging interface which also functioned as activation. To many neighbours, the insights process was in fact the first time many neighbours heard about the plans for Kolstadgata, and so time was ripe to hear their thoughts and ideas.Growlab and Makers’ Hub worked intensively to identify and connect with stakeholders beyond their own, and the municipality’s contacts. One important strategy was to involve local informal communityleaders and other well-connected people. Through these indirect contacts they were able to reach, for example, many local immigrant women’s groups who rarely join public meetings

One clear insight was the need for shelter. Many people at Tøyen livein small apartments and need to use public space as an extension of their homes, even in the rain. Especially the male youth tend to hangout outside in larger groups, as many of them live in small apartments with the rest of their families. In addition to facilitate for a wide range of seating as one would in any square, what is striking about this area is that the neighbours love to use the street and the outside area of K1 for street parties, markets and other community gatherings. The immigrant women expressed their wish that they would love to serve simple foods outside in the weekends when many families are outside. Based on these insights, a range of installations were designed and built in collaboration with local community members. The biggest challenge when doing this was the political decision from the municipality that installations had to be built in thestreet itself which at that time still had traffic going through it.

The building process was organised by MakersHub who recruited acore group of local youth and people from a mental health meeting place to work on the project, and who were paid with an hourly rate. Other neighbours were also invited and joined as volunteers. Over a four-day period two installations were built with variations of sitting/lying platforms that also tentatively could work as smallstages, as well as a market stall with roof which also worked as abench connected to the playground. What became the main installation is a big information board on the school fence explaining the project and also containing quotes from the interviews we had. An opening party activated all the installations as they werethought.To measure the impact, Growlab did observations for a weekand also interviewed passers-by and also some of the contacts they had identified in the insight phase. The feedback was that the installations created a feeling of place and activated dead zones and that they brought a colourful vibe and nice materiality. Growlab and Makers’ Hub worked intensively to identify and connect with stakeholders beyond their own, and the municipality’s contacts. One important strategy was to involve local informal community leaders and other well-connected people. Through these indirect contacts they were able to reach, for example, many local immigrant women’s groups who rarely join public meetings.

One of the most important outputs from the process is still the reportsumming up the whole process. Many locals also appreciated that the building process involved locals, and to see the quotes of the neighbors on the wall.

Financing:The Agency of Urban Environment in the City of Oslo

Did you like the story? Check out more placemaking hero stories in our booklet "Exploring Placemakign in Context"