An Interview with Leo Rygnestad

Through bold trial and error, combined with an in depth understanding of the needs of the most vulnerable communities in the area, Leo Rygnestad and his colleagues at the Tøyen/Grønlandurban regeneration program (URP) have found effective and innovative participatory strategies that also serve as lessons to the larger entities of the Municipality in their mutual quest to achieve a broader and deeper citizen participation. As a public servant working onhyperlocal initiatives, Leo Rygnestad finds himself with a double challenge. First he has to manoeuvre the hierarchical and mostly top-down bureaucracy, procedures, expectations and established ways of doing urban development at the Municipal level, while also actively facilitating, promoting and supporting the bottom-up perspectives of neighboursand hyperlocal initiatives.

"As a public sectorplacemaker, I have to adapt my practises to those of mymunicipality",

he explains. One interesting example ofthis has been the processaround the renovation of Rudolf Nilsens Plass, a smallpark next to a primary school. The URP started the participatory process by inviting the neighbours and key stakeholders to an open meeting, announced in the media.

“THE SOCIAL DIMENSION OF PLACES IS OFTEN IGNORED, BUTPLACES ARE MORE THAN THE PHYSICAL ASPECTS”- Leo Rygnestad

Very few showed up to the stakeholder meeting, and the results were very one-sided towards developing the park into a better football facility. The URP staff suspected that these opinions did not reflect the real needs of the neighbours and decided to dig deeper. Over the next few months they talked to all the user groups they had identified as having an interest in the area, and got widely different results. Some neighbours wanted a peaceful flower garden, others were more vulnerable groups such as the inhabitants of the drugusers’ rehabilitation facility near the park who simply wanted to be allowed to use the space. The second stage was to invite those that had voiced their opinion to a joint meeting where all the proposals and ideas were presented and a consensus was negotiated. This gave all neighbours a solid understanding of the range of opinions that existed, and made it clear that any final concept would have to incorporate the wants and needs of a multifaceted community. 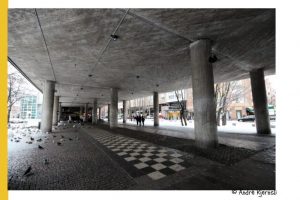 On the Municipal level, these experiences have been effective inshowing public servants in other municipal entities, that civic participation and co-creation needs to go far beyond the “participatory meetings” that are often held just to check a box and that are notorious for having few representatives from vulnerable communities. Importantly, Leo emphasises that such meetings must take place even before the tender for any upgrades is developed and published, and hopefully the city will take these learnings and incorporate them into their larger-scale projects. Leo’s understanding of placemaking is coloured by his lovefor the city and his background as ahistorian; 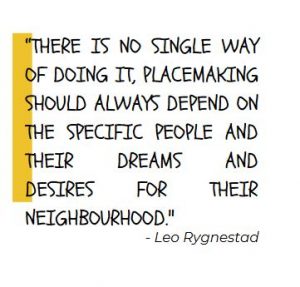 Placemaking isn’t one bigthing, its many, many, many small interactions, everythingfrom meeting someone on the street and having a really good chat, to organising an outdoor concert or organising the purchase of a temporary street installation, and it depends on constant adaptation. 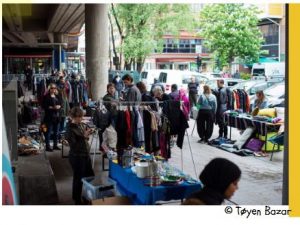 Location:Tøyen/Grønland area in the District of Gamle Oslo

Financing:The URP is a fully funded program by the Vice-Mayors office for Urban Development

Did you like the story? Check out the free booklet "Exploring Placemaking in Context".