The national kick-off meeting of the project PlaceCity – Placemaking for Sustainable, Thriving Cities, was organised by Nabolagshager, with the support of the City of Oslo’s Agency for Urban Environment (as project partner), on the 29th of August  from 14.30-17.00 in Grønland (Oslo). Participants included international PlaceCity partners such as Roland Krebs from Superwien (Vienna), Bahanur Nasya from Eutropian (Vienna) and Jeroen Laven and Anna Bradley from Stipo (the Netherlands). Norwegian participants covered a wide range of stakeholders from the public and private sectors, as well as key and experienced placemakers from Oslo and throughout Norway.

During the meeting, Nabolagshager presented the main goals and expected results of the PlaceCity project, which are, among others, the establishment of a multidisciplinary and trans-sectorial Placemaking Europe Network and building an open source placemaking toolbox in which placemakers and city changers can share some of the secrets behind their projects. In addition, Roland Krebs from Superwien presented the local case study in Vienna which focuses on activating and strengthening the 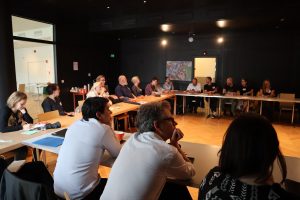 centre of Floridsdorf by developing a common vision to vitalize urban spaces and make them useful for the local population. The case study in Oslo was presented by Helene Gallis from Nabolasghager, which has a main goal to empower at-risk youth and create meeting places across demographic groups in a local high school located in Grønland (Oslo’s most multicultural neighbourhood).

During the second part of this meeting, Nabolagshager, together with Stipo, organised an  “Eye Level Game” workshop where participants were able to test this placemaking tool and bring out the best ideas to improve a nearby street called Hollendergata. The large group was split into four smaller groups and then began the analysis of the street. They walked and talked in groups, observed the street and analysed it using the “Eye Level Game survey” and came back together to  share ideas and insights for long-term (three years or more) and short-term (between now and three months) improvements for the street, and possible partners to put these ideas into action. The results of this workshop revealed and highlighted a lot of opportunities for improvements in this street and identified potential partnerships and participants’ own role in this process. The manual that gives you a step by step guide on how to organise your very own Eye Level Game is available on the Placemaking Europe webpage, together with fifteen other downloadable manuals.

The national kick-off meeting in Oslo was also a great opportunity to meet international and national placemakers working to make sustainable, collaborative and inclusive public spaces. This meeting was the starting point for the establishment of a local network of placemakers in Oslo.